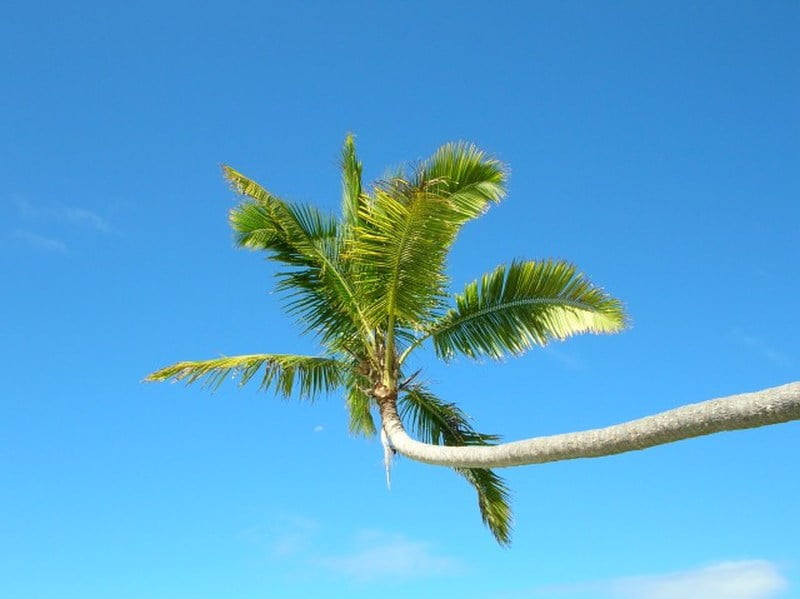 There is no best weather time in Fiji, the weather is mild and tropical all year round, and you will always have fun visiting the beautiful Fiji Islands. In the height of summer, it can get very humid and hot, there are then almost daily heavy, but very short tropical rainfalls in the afternoon, mainly on the windward side of the larger islands. In the wintertime, which is considered for many the better time of the year to travel to Fiji, there can often be rain and bad weather too, sometimes it drizzles for a week or so and the temperatures can be really fresh at night. If you are used to tropical weather, you will find it especially cold in August, when the temperatures could drop below 20 degrees at night 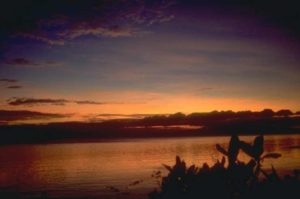 The year-round weather in the Fiji Islands is that of a mild tropical maritime climate with no extreme heat or cold. The average daily temperature around the Fiji Islands varies by only a few degrees. This is because of the temperature-stabilizing influence of the surrounding ocean.

The Summer from November till April is warm and humid. Days are usually calm and sunny often with short but heavy afternoon or night showers. Summer temperatures average about 28 C / 83 F. The warmest and calmest is usually February/March with Temperatures just over 30 Celsius / 87 Fahrenheit. Diving in summer is nice, even the visibility is not as good as in winter, but you just don’t get cold.

The Winter from May till October brings drier southeast trade winds that can cause the evenings to be cool and windy. The average daytime temperature in winter is around 25 C / 77F. August usually is the coldest month temperatures can drop just under 20 Celsius /68F on overcast days. 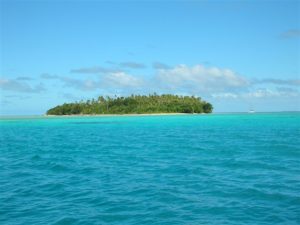 The average winds in Fiji are light to moderate, with the prevailing wind direction being dominated by southeast trade winds. The summer months are usually calm, with flat seas for many weeks, which makes boat trips very easy and enjoyable.  In winter the trade winds pick up and become more persistent. The strongest average winds are in August, and seas are often choppy and rough for many weeks. Boat trips with small boats are often uncomfortable then and may be restricted for safety consideration to close protected dive sites.

Rainfall in Fiji is influenced by the topography of the islands and the prevailing southeast trade winds.
Those trade winds are blowing over warm tropical oceans picking up moisture. When this warm moist air is cooled off, as it happens when it hits mountains and is forced to move up to cooler regions, the water will condense into clouds and rain.

Much of Fiji`s rain falls in heavy brief local showers. Those can be abundant during the “wet half of the year” (November to April), especially over the larger islands as just described. In the “drier half of the year” (May to October), the heaviest rainfalls occur on the windward sides of the larger islands.
The wettest month is usually March and the driest month is almost always July. During the wet season, brief heavy afternoon showers and thunderstorms are common.

But those are the statistics. But, bad weather spells like a week or two of continuous rain can happen at any time of the year. 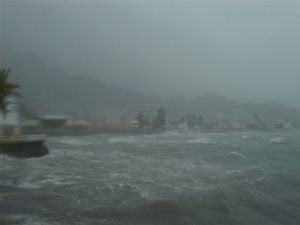 The weather in Fiji can get really ugly during a tropical cyclone. But fortunately, the Fiji Islands are only occasionally affected by tropical cyclones. They occur usually in the summer season from November to April. That’s why summer is also being called the cyclone season.

The weather in Fiji’s summer and in most of the equatorial Pacific is dominated by long calm periods with no wind and calm seas. This gives the sun the chance to heat up the ocean and the air above it. Hot air moves up creating low pressure. When there is enough energy build-up, then these tropical low-pressure cells can form into a tropical cyclone.

Most cyclones in the South Pacific never make landfall because the Pacific is just so big and wide.  So cyclones that affect Fiji are rare. Statistically, only one cyclone per year affects some islands of the Fiji group. Of those, only every third one causes severe damage to some areas in Fiji. Specific locations or islands are often not directly affected for several years. To experience a cyclone in Fiji is a rare event.
More about Fiji Weather on Fiji Meteorological Service