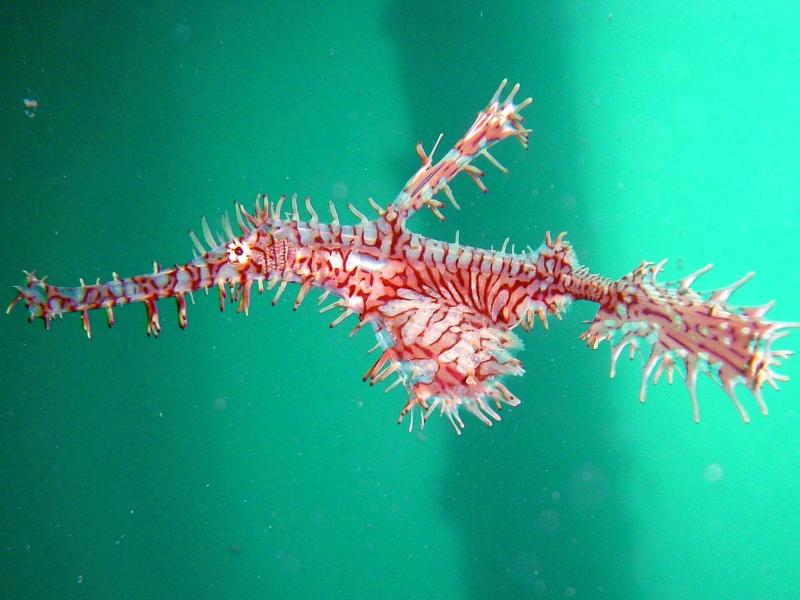 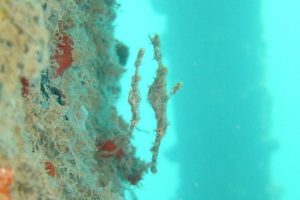 Ghost pipefish are small fish that belong to the same order as seahorses and sea dragons.

They appear seasonally in shallow waters on coastal reefs and mucky sediments. Ghost pipefish are masters of camouflage, divers are always thrilled when they see these unusual fish during a dive.

Perfectly camouflaged, they remain motionless and blend in well with their surroundings, so that they can hardly be found.

To discover these unusual small fish hidden between crinoids, sponges, corals, or seaweed it needs experienced eyes and knowledge about their mimicry, and how to behave in the environment.

Ghost pipefishes grow to be about 10 to 15 centimeters long.

They have a short, laterally flattened body, which is not even 1 centimeter wide.

Their body is covered with small scales.

Several different species that mimic their respective environment and perfectly blend in.

Typical for the Harlequin ghost pipefish are the thorn-like skin appendages reminiscent of the feathers of feather stars.

The robust and delicate ghost pipefish, on the other hand, look like seaweed.

Coloring and appearance can vary widely within one species, between the sexes, as well as between adults and juveniles.

The family name Solenostomidae derives from the Latin solen = tube and stoma = mouth.

They float often with their heads down and show little movement. When prey nears, they suck it in through their tubular snout.

Where do ghost pipefish live

Ghost pipefish are seasonal and are only present for a few months of the year, usually during the summer month when the water is warmest.

In Fiji, this is from December through to February. After that they disappear, I have never seen one in the cold time of the year.

Ghost pipefishes preferring sheltered spots such as shallow protected reefs, coastal bays or ‘muck’ sites. They seem to love to hang out under Jetties.

Not that much is know about their life cycle.

They spend the greater part of their life as a larval stage in the pelagial.

When grown enough to reproduce the morph into an adult form and settle in shallow protected waters and coral reefs to a depths of up to 25 meters.

They usually appear in pairs and seem to be monogamous.

The female ghost pipefish broods the eggs. Its large pelvic fins form a pouch under the body in which the eggs are kept.

Soon after the young have hatched, the adult fish disappear.