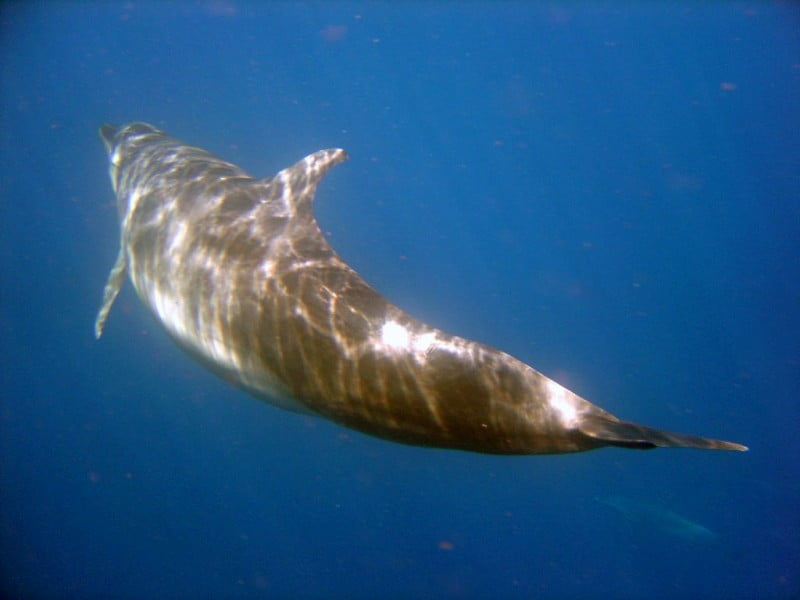 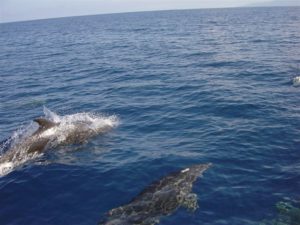 Most people probably know the TV series “Flipper” where the main animal protagonist is a trained bottlenose dolphin. Bottlenose dolphins are some of the most common and well-known members of the Dolphin family.

Bottlenose dolphins inhabit warm and temperate seas worldwide, they live in pods of 30 to 40 animals. Sometimes Superpods of over 1000 animals are seen.

They hunt in groups for fish, squid, and crustaceans. 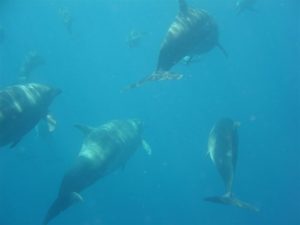 They do also form opportunistic groups with other dolphins or whales. This behavior may serve protection by simply being a larger group, as well as being a benefit while hunting.

A bottlenose dolphin can grow very large to over 3 meters and is very impressive in the water.

Bottlenose dolphins have been well studied, they have the largest brain in ratio to the body mass of any animal. The latest research shows high intelligence, emotional intelligence,  as well as complex communication.

When in the water with them, one can clearly hear their whistles and clicks with which they echolocate their surroundings and communicate. 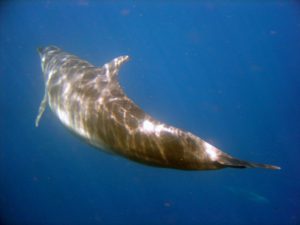 Their echolocation, when directly hit, produces a prickling sensation on the skin.

Bottlenose dolphins show often great curiosity to humans in the water. There are even historical reports about the rescue of humans in distress.

Their high intelligence, social abilities, and playfulness have landed them in aquariums around the world. This is highly controversial as they are confined to very small spaces, but on the other hand, give many people the only chance to ever see a dolphin and may create awareness for their conservation.

They are also trained by the army as military dolphins (also highly controversial). 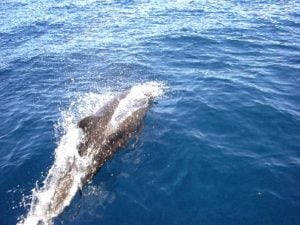 “Dolphin encounter” tour operators that take guests out to see wild or captured dolphins exist in many countries. It is usually restricted to passive observation only, with a strict code of practice.

Fortunately for dolphin-watching enthusiasts, the dolphins like to approach boats and ride the bow wave. Most in-water encounters of wild bottlenose dolphins are random encounters when swimming snorkeling or diving.

In Fiji you can see the bottlenose dolphin all year round, mostly on boat trips through the open sea from island to island or on scuba excursions, suddenly they are next to the boat or you see them on the horizon.

All images here are taken between Ovalau and Wakaya.