Ocean acidification is the ongoing increase in the acidity of the Earth’s oceans, caused by the uptake of carbon dioxide (CO2) from the atmosphere. Increasing acidity is having harmful consequences for marine organisms, such as altering metabolic rates and immune responses in some organisms and causing coral bleaching.

Ocean Acidification: A major threat to the marine habitat

What is Ocean Acidification?

The ocean is an extraordinary place. It is where all life began and is one of the largest and most important ecosystems on this planet. Various species ranging from the smallest phytoplankton to the largest mammal on earth dwell in this marine habitat. Unfortunately, the ocean is slowly being affected by climate change, mostly due to anthropogenic activity. Over the past few decades, advancements in technology have resulted in increased use and consumption of fossil fuels. This has lead to major land and air pollution resulting in the levels of atmospheric carbon dioxide to increase immensely.

History and background of atmospheric CO2

CO2 accumulation in the atmosphere increases the natural greenhouse effect and causes climate change. The ocean and the terrestrial biosphere are both carbon sinks that reduce climate change. Should these sinks lose their effectiveness, CO2 would remain in the atmosphere, causing climatic distress (Gatusso & Hansson, 2011). It has been estimated that about 25% of the accumulated CO2 from the past 200 years has been taken up by the ocean (Fabry et al., 2008). 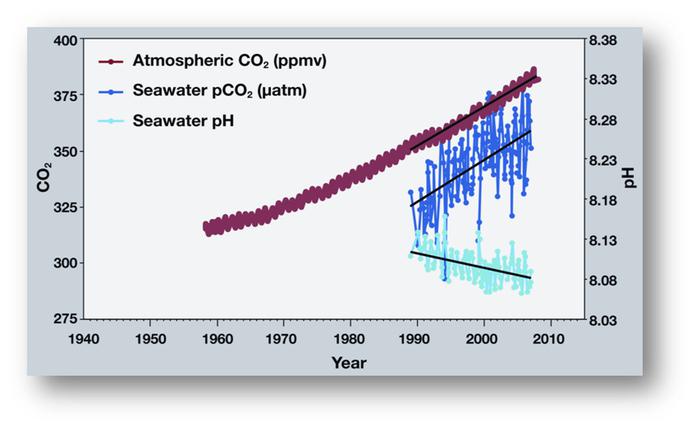 Figure 1: Time series of atmospheric CO2, CO2 uptake into the ocean and pH of the ocean surrounding Hawaii.  Source: http://www.pmel.noaa.gov/co2/story/Ocean+Acidification

The ocean has a pH of ~8 and it is mostly controlled by the inorganic carbon system. Three major forms of dissolved inorganic carbon that exist in the ocean are bicarbonate ion (HCO3−), carbonate ion (CO32−), and aqueous carbon dioxide (CO2(aq)). As atmospheric CO2 is taken up by the ocean, a set of chemical reactions occur. CO2 reacts with water (H2O) to form carbonic acid (H2CO3): CO2 + H2O  H2CO3. Carbonic acid dissolves rapidly to form a hydrogen ion (H+), an acid, and bicarbonate ion (HCO3−), a base. Seawater is naturally saturated with another base, carbonate ion, that acts like an antacid to neutralize the H+, forming more bicarbonate: CO2 + H2O + CO3−2→ 2HCO3. This results in a decrease in carbonate ions in the ocean. Therefore, the overall effect of CO2 uptake into the ocean causes an increase in the concentration of carbonic acid, bicarbonate ions and hydrogen ions and a decrease in the concentration of carbonate ions and lowers the pH (Fabry et al., 2008).

The effects on marine biota 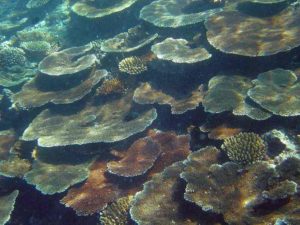 Marine organisms vary in size and structure, therefore, they respond differently to ocean acidification. Ocean acidification can affect the dissolution and calcification rates, growth rates, development and survival of marine species (Kroeker, Kordas, Crim, & Singh, 2010). The carbonate ions in calcium carbonate (CaCO3) are an important building block for calcifying species such as corals, mollusks, echinoderms, crustaceans and calcareous plankton (Fabry et al., 2008). A decrease would cause difficulty in building and maintaining the calcium carbonate structures (Doney et al., 2009). For example, the Pteropod is a free-swimming pelagic sea snail that has a calcium carbonate shell. According to scientists, ocean acidification is causing the shell to dissolve. The prismatic layer of the shell has completely dissolved, exposing the deeper layers to porosity (Kintisch, 2014).

Not only does ocean acidification affect calcifying organisms but also non-calcifying organisms, for example, fish. Acidic water minimizes a fish’s ability to detect predators. At the end of their larval stage, fish develop olfactory organs that help them sense suitable settlement sites and predators. However, the acidic water reduces the fish’s olfactory sense (Munday et al., 2009), making them more vulnerable to predators.

Even though not all species will be immediately affected, the loss of certain organisms could lead to ecological shifts in the marine ecosystem (Kroeker et al., 2010), for example, coral reefs. They are home to many marine species, providing food and shelter. Ocean acidification and a rise in the ocean’s temperature negatively affect coral reefs, causing bleaching and preventing these organisms from accumulating calcium carbonate (Anthony, Kline, Diaz-Pulido, Dove, & Hoegh-Guldberg, 2008). As coral reefs slowly start to die, habitats are lost, feeding behavior is affected and the general species distribution changes. Since ocean acidification occurs globally, many coral reefs are affected. This makes it more problematic for other marine species to find food and shelter, making them susceptible to predation, starvation, and endangerment.

How to stop ocean acidification

Ocean acidification is a process that cannot simply be stopped in a short period of time. It is a task that requires a lot of time and understanding. Scientists are undertaking research and monitoring ocean acidification in order to assist with the changes occurring.
Ocean Conservancy is trying to encourage the human population to understand the consequences of using fossil fuels, driving vehicles, building industries, etc. Humankind needs to come to terms with the fact, that, in order to save the Earth, they have to take drastic measures to try and reduce anthropogenic carbon dioxide. Simple tasks, such as reducing carbon emissions at home or at work or using renewable energy resources, can be performed. Larger tasks, for example, reducing the use of fossil fuels in industries can be undertaken by groups of interested people.
Through scientific research, future levels of CO2 concentration can be predicted, as well as the uptake into the ocean. New technologies and advances would help quantify the effects ocean acidification has on marine biota (Fabry et al., 2008).

Damaging something is much easier than fixing it. This means that although the Earth has the capability of regenerating itself, it requires many years. Ocean acidification or climate change, in general, occurs relatively quickly. Ocean acidification is expected to have significant physiological, ecological and evolutionary consequences in the marine ecosystem and extreme measures need to be taken in order to stop ocean acidification. Not only will the marine ecosystem be affected, but also the terrestrial ecosystem and the human population. Whether directly or indirectly we, together with the rest of the flora and fauna on earth, will experience the consequences of higher CO2 in the atmosphere and ocean.